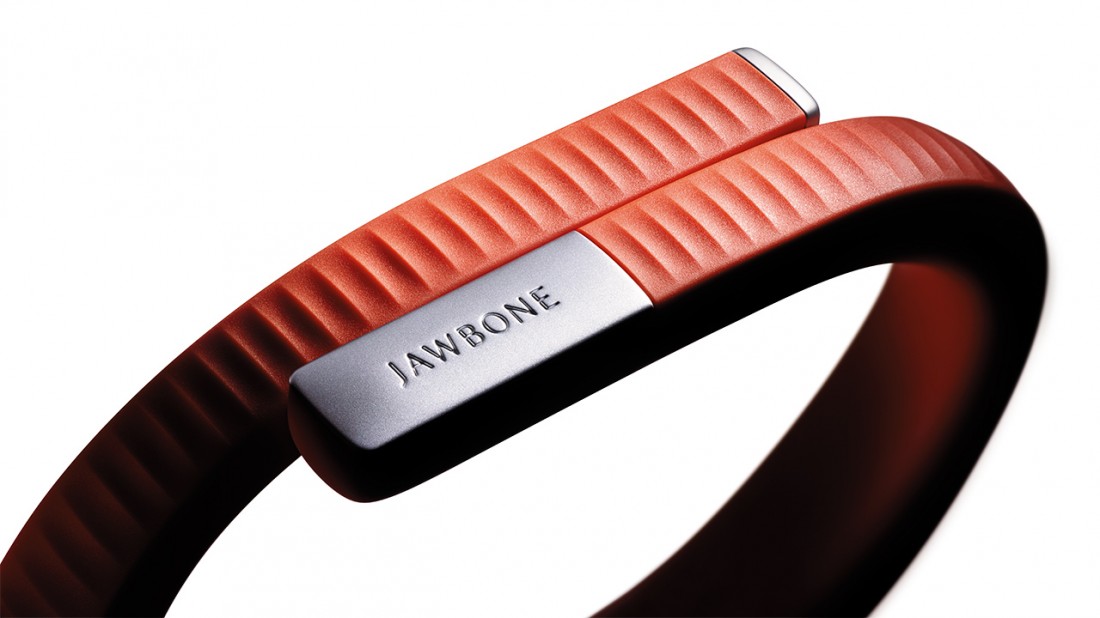 The UP24 is the latest fitness tracker from Jawbone and aims to help you “act in the moment and live better”. But can a fitness tracker really make you healthier and happier? I decided to give one a try and find out.

The UP24 has a stylish yet understated design. In fact, most people would probably mistake it for  for a bangle or a bracelet instead of a hi-tech fitness tracker. The device is made from a soft rubber which is both comfortable and lightweight, which is good since you need to wear it almost 24/7.

Unlike other fitness trackers like the Nike FuelBand, the UP24 doesn’t have any sort of screen on the device itself. This means that you’ll need to check your phone in order to see any of your fitness data. I actually didn’t miss having a screen on my wrist as it made the UP24 lighter and less obtrusive. I also really liked using the excellent UP app which syncs wirelessly with your band throughout the day.

It should be noted that the arms of the UP24 don’t fasten, clip or lock into place. Instead, the arms of the band kind of just wrap around and hug your wrist. Initially I thought this would cause the band to keep slipping up and down my wrist but thankfully this wasn’t the case. Just make sure you get the right size band for your wrist if you decide to buy one for maximum comfort.

The UP24’s battery life is really impressive. The device only needs to be charged about once a week which is fantastic. When you do charge the device,  you’ll need to plug it into a mini headphone jack / USB adaptor. Both the adapter and the headphone jack cover on the device are quite small so you just need to be extra careful not to lose them as I imagine they will both be quite difficult to replace.

The UP app is incredibly well designed and makes it easy to access and keep track of all your fitness data. The UP app primarily focuses on three main areas:

In addition to measuring the above, the app also prompts you with recommendations based on your data,  offer tips and make recommendations to help you reach your health goals. It’s like having a friendly little gym buddy that is always looking out for you.

The app is very functional, allowing you to easily log exercise sessions and meals and does a great job of visualising your data. If you use other fitness apps like Runkeeper,  My Fitness Pal or even,  IFTTT,  you can even connect them to the UP app to take your training further.

The app also has a social component called ‘My Team’ which allows you to to see the activity of friends who are also using Jawbone devices in your UP news feed. It’s great to see friends activity and be able to encourage each other but a small part of me does feel a bit creepy knowing when my friends are sleeping. Or is it just me?

Speaking of sleep, it’s one area where UP24 stands out. It does a really good job of tracking your sleeping patterns and explaining how they affect your health and overall mood. The app even allows you to set a smart alarm that wakes you up in the morning while you are in a specific part of your sleep cycle so you feel more refreshed and energised.

If you are looking for a fitness band that does more than just count your steps, you should seriously consider the UP24. It has a sleek, comfortable design, excellent battery life and wirelessly syncs all your fitness data with your phone. It makes it easy to track your fitness, your food intake, your sleeping patterns and your overall mood. If you are looking for that extra bit of motivation, the UP24 could just be for you.

The UP app is available for Android and iOS. You can find out more information about the app and check device compatibility by clicking below. UP24 devices are compatible with devices running Android 4.3 and later as well as the iPhone 4S, 3rd generation iPads, iPad Minis and 5th generation iPods and newer.

So Social. Much Viral. Wow! 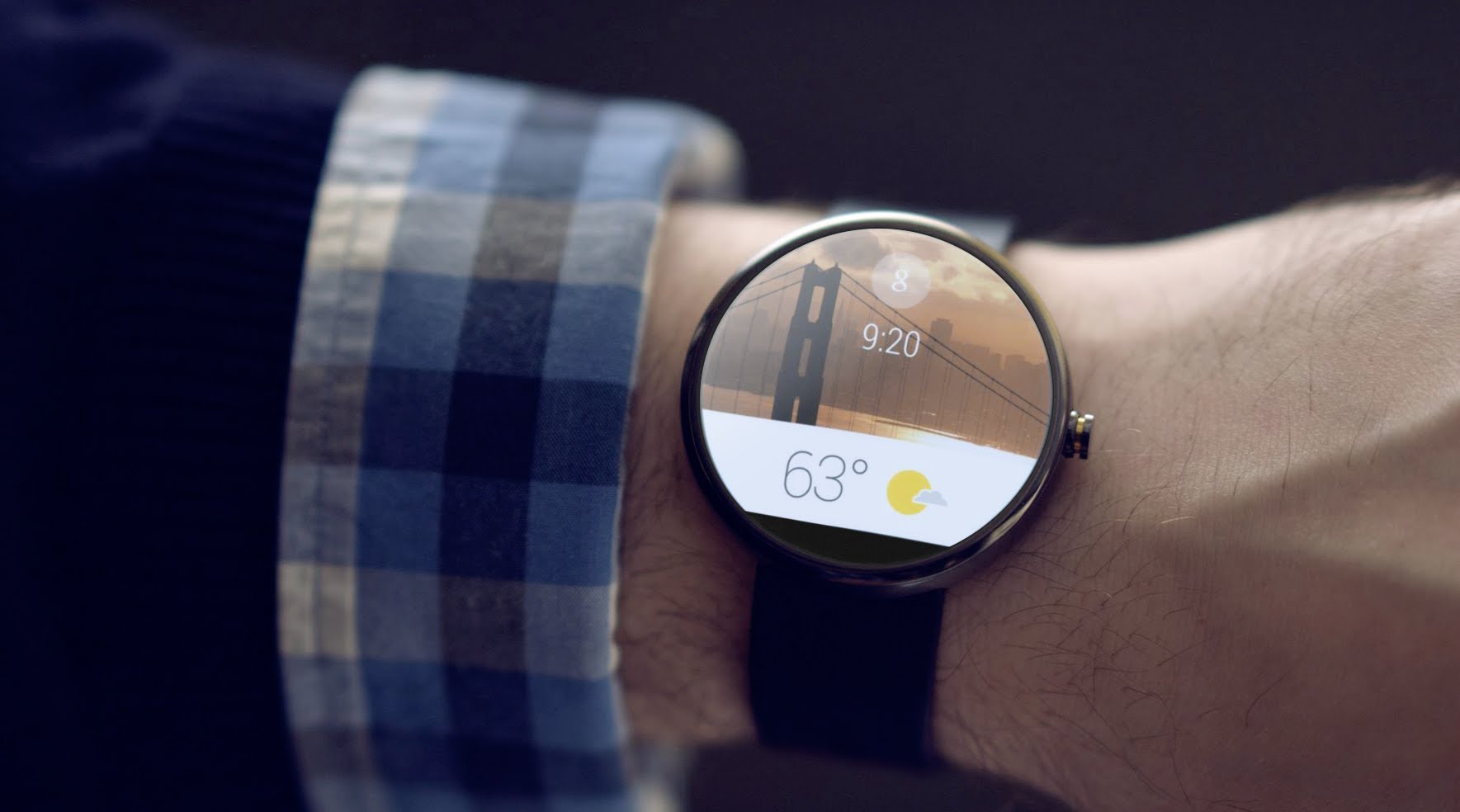 2014 is the year of the wearable. Everyone is talking about wearables and every device manufacturer is trying to sell you one. But what should a wearable do? And do we even need them?

These are they types of questions that have floated around the world of tech as we all wait for a company like Google or Apple to step forward and connect the dots for all other consumer electronics companies, showing them the way forward. Well a few weeks ago, Google unveiled a preview of Android Wear, a modified version of Android designed specifically for wearables. The good news: the dots have been connected beautifully. The bad news, at least for Apple, is that Android Wear might have just solved everything wrong with wearable devices.

Here are 5 reasons why Android Wear has positioned itself perfectly to win the war for being the dominant platform for wearable devices:

Android Wear is powered by Google Now, Google’s contextually aware, card based system. Google has implemented a similar card-based system for Google Glass and it has been praised as an ideal UI for wearables, showcasing that it can work across a number of different form factors. This card-based approach to UI offers the perfect balance between information and interaction, reminding us why the wearable category so compelling.

The other side of including Google Now into Android Wear is context. The promise of wearable devices is the added value that can be created “in the moment” through contextual data. These devices will need to know things like has there been a traffic accident on the way to work? Has my flight been delayed? Am I missing the rugby to take my girlfriend out for our anniversary but still want to know what’s happening in the game?

All of this requires contextual data and no one is doing a better job at collecting and interpreting this data than Google. And while Android is free, Google Now is proprietary software. This means that if you are a wearable device manufacturer and you want context baked into your device, you pretty much need to jump on the Android Wear bandwagon. This is something that should be worrying Apple as they can’t compete with Google in this particular area.

If your wearable device has a screen, it will most likely be tiny. Which is fine if all you want your wearable device to do is just give you your latest notifications…but who wants that? That sounds lame. Of course you want to get these super cool contextual updates but you also want to do do something with them without taking out your smartphone.

Android Wear includes all the great work that Google has done with voice controls in Android over the past few years. One of Google’s goals is to create the Star Trek computer, a computer that can be controlled using natural language. It sounds incredibly geeky, but if Google can make talking to our computers seem normal, it will be a huge factor in ensuring wearables have mass market appeal.

Android has an incredible amount of momentum behind it with over a billion Android smartphones and tablets being activated around the world in the past 8 years. Android is the most popular mobile OS in the world today and one of the reasons for all of this success is that it is open.

According to Business Insider’s recent report on the Internet of Things, the number of devices that will make up the internet of things is going to far exceed the number of both smartphones and tablets in the world. Judging from the recent smartphone and tablet wars, open systems will trump closed systems. If you want to build a world where everything can talk to everything, regardless of specs, screen size or manufacturer, Android seems to be the smart platform to use and Android Wear is going to be the thing that makes sure everything can keep on talking. 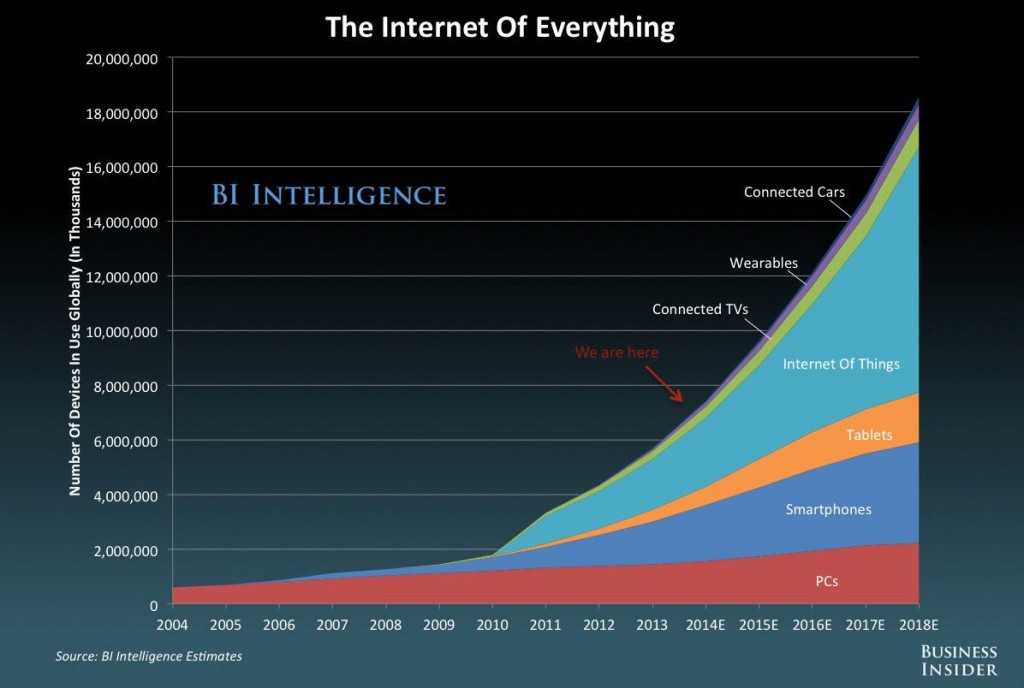 One of Android’s key selling points over iOS has been cusomisation. But moving forward, we won’t be worried about customising our phone’s wallpapers or widgets. Every part of our lives and all the devices in them will be fully customisable. Starting with what kind of wearible you want and what you actually want it to do.

You want a smartwatch? A fitness tracker? A sleep tracker? A smart thermostat? A mask that measures air quality? Glasses that take videos? Hats that broadcast free wi-fi? A toothbrush that automatically books an appointment with your dentist? Whatever you can think of, someone will build it. And if I’m right about openness and custimisation, people will probably be building it on something like Android Wear.

So Social. Much Viral. Wow!